Necessity of a grand mosque was felt in the newly developed capital of Pakistan and after careful consideration a site for the proposed mosque was selected at the foot of Margalla hills on the axis of Shahrah-e-Islamabad. His Majesty the late King Faisal of Saudi Arabia during his visit to Islamabad in 1966 liked the idea of the construction of a grand Mosque as well as the site and graciously offered to bear the expenditure of the Grand National Mosque Project. Accordingly, this Grand National Mosque has been named after the late King Faisal. The stretch of Islamabad High Way from Zero point leading to the mosque has also been named as the Faisal Avenue. 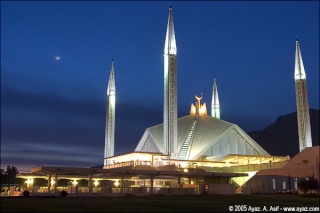 In order to select a befitting design of the mosque an international competition was organized in 1969. All the leading architects of the Muslim World were invited to submit their designs and out of the several designs received from various countries, the design of Mr. Vedat Dalokay, one of the leading Turkish architects was adjudged to be the best. The execution of the work was, however, assigned to the Pakistani engineers and workers.

The foundation stone of the Masjid was laid by His Majesty late King Khalid of Saudi Arabia in October, 1976 and the contract was awarded to M/S National Construction Limited for Phase-I and Phase-If in 1978. Main components of the Mosque are given below:

Four main girders, each girder comprising two legs. The girders meet at summit. Double slab roof with hinged beams and cross beams transmit load to the girders. All the walls have been beautifully designed especially Qibla Wall which is the main focus of attraction. It has been decorated with multi-glazed tiles from Turkey forming inscription of Kaiima-e-Tauheed. On the roof of the main hail, a huge golden crescent has been fixed:
Minarets


Minarets are provided at each corner of the prayer halt reaching a height of 285 feet. Each of the minaret offers the facility of an elevator and staircases up to visitor's gallery located at 190 feet above the ground level. The visitors can have a Danoramic view of Islamabad while in the gallery. All the minarets have Gold plated crescents on their tops.

The spacious courtyard is paved with beautiful granite, a durable stone imported from Italy and has the capacity to accommodate 40,000 persons. Porticos can be seen at the periphery of main courtyard of the mosque with a series of columns and roof structure with a geometric pattern matching the mosque having an additional capacity of 20,000 persons.

A fountain has been provided inside the Main Prayer Hall near the entrance from the Eastern side and it is clad with beautifully carved white marbles in attractive patterns.

A reflection pool is provided under the Qibla Wall with a series of small foundations clad with blue tiles. The fresh cool air can be sucked in or stopped with the adjustment of water level in the pool. Another reflection pool is also provided in the north of the Prayer Hall.

The Ablution area is located in front of the main approach platform and comprises of 200 ablution units. These are made of white marble with a net work of fountains in the centre. The walls have been clad with multi coloured glazed tiles from Turkey forming attractive patterns.

A chandelier had been installed in the center of the main prayer hail for decoration purposes. It consists of aluminum tubes anodized in gold color in the shape of a central sphere and an outer ring equipped with 1000 electric bulbs for illumination at night. The weight of chandelier is 7.5 tons.

An Islamic University has also been established along with the mosque. It is located in the mosque grounds and the first floor under the courtyard in the East with facilities of Library, Conference Room, Printing Press and Cafeteria. ft is functioning with seven hundred students from within and outside the country. An Islamic Research Institute is also associated with the University.