The Badshahi Mosque at Lahore is the largest mosque in the world of its own kind. It has no parallel in beauty and elegance. There is a beautiful marble slab, fixed in the main entrance of the mosque, containing an inscription in Persian. Translation of the same is given below "The mosque of the victorious and valiant King Muhy-ud-Din Muhammad Alamgir, constructed and completed under the superintendence of the humblest servant of the royal household, Fidai Khan Koka, in 1084 A.H." 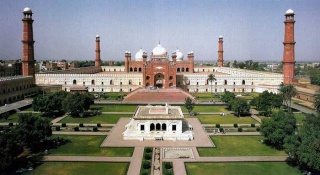 So it is clear that this unique piece of architecture was built in 1673 A.D. for emperor Aurangzeb Alamgir by Fidai Khan, the foster brother of the Emperor. The design of the mosque is bound by convention. It is a building of very strong and resolute character. One of the most outstanding features of this mosque is its minarets. It is provided with more minarets than any other such huge mosque built by Mughals anywhere else. It has one minaret at each corner of the mosque enclosure and another, though somewhat smaller, at each angle of the sanctuary, thus aggregating eight in all. It is the most striking architecture in Lahore and its huge domes and minarets can be spotted from a great distance. Apart from its architectural magnificence, the Badshahi mosque is one of the largest mosques of the world.

It is a known fact that the Mughal Architecture is the most sumptuous manifestation of the building art of the Muslims as a whole. This architecture style has been acknowledged as the blending of grace, strength and harmony. While this great architecture style was in its final phase, the Badshahi mosque was the last accomplishment of the great Mughals of that phase.

The mosque is built on a raised platform and the main entrance is approached by a flight of twenty-two steps, rising from three sides and ending on a red sandstone platform measuring 65 by 35 feet. The entrance is a double storey edifice. It is in the traditional Mughal style with a graceful three-centered high central vault, elaborately decorated with framed and carved panelling on all its facades.

On the upper storey of the main entrance, which has already been converted into a small museum, are kept the relics of Prophet Mohammad (May peace be upon him) and some of the other important leaders of the faith of Islam.

The amazing symmetry of the three giant white marble domes capping many arches of the mosque is a marvel of harmony in masonry. Its red sandstone minarets form a startling contrast against the white domes and the blue sky. Its vast courtyard, characteristic of Mughal architecture, is bounded on all corners by four towering minarets of red sandstone with white marble cupolas. These minarets have three storeys excluding their solid plinth about 20 feet high which is sometimes confused by many as an independent storey.

The total height of these minarets is 176 feet above their plinth. The top pavilion carried over 8 octagonal columns is alone 32 feet high. The minarets are octagonal from outside but circular and hollow inside. The centre is occupied by a vertical shaft round which run 204 steps to ascend to the top pavilion which offers beautiful bird's eye views of the city. The strength of these minarets can be judged from the fact that their outside circumference is 67 feet and inside is 8 1/2 feet only. The original top pavilions were lost in an earthquake during 1840 A.D. but they have now been restored completely.

The summit of these minarets was used for a different purpose by the Sikhs while fighting with each other. They were used first by Sher Singh in January 1841 during the famous siege of the fort. He posted his matchlock men there who, with their fiery weapons, spread destruction in the ranks of the besieged Dogras who were supporting Rani Chand Kour. The Rani was defeated. Later on Hira Singh used these minarets. He placed light guns on their summit and defeated the besieged Sindhianwals.

The main entrance opens on a large quadrangle or courtyard (2,76,310 sq. feet) which is almost square, five hundred and thirty by five hundred and twenty seven feet to be exact. In the centre there is a reservoir of water for ablutions, though it is not used for this purpose now. This reservoir is surrounded by a marble Jaali and in the center there is a fountain. The vast courtyard can be divided into upper and lower parts. The lower one is known as fina. The upper part can be divided further into three parts, the central portion or the main courtyard of the mosque and the two side ones which are lower by one step than the central part. The courtyard is flanked all around by beautiful arcade which served as a 'Madrasa' (School) in good old Mughal days. The arcade on the east side was pulled down by the British in 1856 but it has already been reconstructed and used as a long ablution hail.

The center of the west side of the vast courtyard is occupied by the aiwan of the mosque (prayer chamber) which is spread over an area of 23,375 sq. feet. It is higher than the courtyard by three feet and approached by a flight of sang-e-abri steps. Though smaller in size than the vast courtyard, it is well proportioned, bold and impressive.

Its red sandstone facade, has a large and magnificent three-centered central vault with five subsidiary arches on each side. It is panelled, carved and enriched with marble inlay in lineal, floral and geometrical patternsAll these decoration inlay and carving were obviously designed by the builders to create contrast of light and shade, in order to break the

Monotony of a vast background of red sandstone of the sanctuary. The embellishment, both external and internal, of the main vault, 55 feet high, with Zanjira, interlacing and blooming flowers and their spidery tendrils, all treated itt bold relief is a unique work unsurpassed in beauty and workmanship even in the Mughal Architecture.

The interior consists of two deep and long halls. The front compartment is divided into two big halls by the intercepting central vault. The back portion is divided into seven intercommunicating halls or bays by means of eight thick arches on massive jambs which was a technical necessity to take the load of the heavy roof and domes above. The dado of the whole of the interior is of well-polished sang-e-abri. The rest of the interior with the exception of the mehrab and spendreis of the central hail, which have marble veneer, is finished with lime plaster bearing in relief of floral network of excellent workmanship, attractive in shape and the curves suited to different positions. Though it was tastefully painted with bright colors in fresco, yet the overall is that of a sober composition During the Sikh period the mosque was damaged considerably because it was used as a military magazine and store house. In the British period also its arcades and Hujras were used as the residential quarters of the soldiers. Finally the British started selling its sandstone slabs after removing them from various parts which was strongly resented by the Muslim population of Lahore. The mosque was, however, restored to the Muslims in 1856 A.D. Extensive repairs were carried out by the government of Pakistan to restore the glory of the mosque.